You often hear about how mold can be damaging to your immune system or home, but?we recently came across a discovery?which?helps show?how mold is used to our benefit instead.

A team from Italy, the Netherlands, Denmark and Slovenia has published findings which describe a recently identified type of mold in the Penicillium family. Scientists were originally examining white mold, which grew on dried salami in a European sausage factory. Examinations yielded a green colored mold that is related to Penicillium. DNA from this green mold was analyzed, and it was concluded that this ?new? mold actually exists all over the world in sausage factories, but was just never identified or described scientifically

There is nothing to fear from ingesting this type of mold though, and chances are if you like deli meat, you might have done so already. Many molds are actually helpful for foods such as cheese and sausages. Reactions are created from the biological responses of mold growth, and these add certain desired flavors to the food. Additionally, by coating the food itself, beneficial molds such as certain Penicillium prevent the development of more harmful molds and bacteria. Penicillium is the most common of these beneficial molds and has a white powdery appearance to it. These molds are so beneficial that sometimes many producers will actually spray diluted compounds containing Penicillium spores onto their cheeses and sausages!

This specific mold was growing alongside an already well known type of mold, Penicillium Nalgiovense. The scientists involved in this research decided on a much easier to remember Latin name for the new type of mold: Penicillium Salamii.

Here at MVP Environmental Solutions, we can help you combat the bad kind of mold that is not so desirable or tasty? such as Stachybotrys, Chaetomium, Memnoniella, Cladosporium, amongst others. And even though many Penicillium molds can be beneficial, it can absolutely be harmful as well, depending on a person?s immune system and other detrimental conditions in their property. 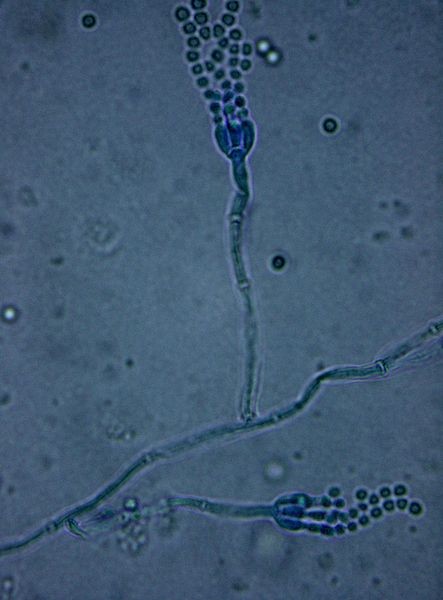 A microscopic picture of Penicillium spores