Skip to content
Previous Next
Supreme Court Structure Claimed to be a ?Sick Building,? Plagued With Mold, Water Leaks, and HVAC Problems

Judges and staff at a Judicial Building and Washington Street Building have been complaining about mold in their offices, dirty tap water, and lingering health issues.

Investigations into several complaints, as well as air quality results have shown that there is much room for improvement in concerns to the health and safety of building occupants.

One judge experienced a water leak that subsequently lead to a ceiling tile falling in her chambers. As she picked the debris up, she observed mold growth on the ceiling tile?and became ill shortly after cleaning up her office from the collapse. The illness progressed into bronchitis- her third case since joining the court in 2012. An air quality consultant reported that another judge also had an HVAC-related water overflow in their office, with a subsequent persistent cough that lasted for 3 months. Furthermore, a deputy attorney reported a water leak so severe that her employees? work stations had to be wrapped in plastic, and her carpet had become ruined over time.

Specific air quality concerns have also been voiced, and one attorney reported that her employees started sneezing and coughing every time she took off old vent filters after HVAC units were cleaned. One staff member allegedly coughed so hard that she could not breathe. Occupants in the Washington Street Building nearby were diagnosed with asthma after starting their work in that area, and many people experienced a raspy voice and post-nasal drip for about a week after work had commenced.

The Georgia Building Authority has spent thousands of dollars on remediating these problems. Air testing was conducted in August, where a consultant declared that air filtration was nonexistent in the building, and elevated levels of mold spores associated with high humidity, dust, damp building materials and water damage were present. Recommendations included operating the building systems so that more dehumidification is provided during weekends, moving furniture that usually restricts air flow into and out of all HVAC units, and continuing increased HVAC cleaning. Drywall repair and flooring replacement occurred in damaged areas, and drainage problems within units are being addressed. Follow up air quality testing was performed after these actions were put into place, and the concentration of fungal spores was much lower than before cleanup activities occurred. However, many staff believe they need a new building altogether, since the current building is over 60 years old and plagued with recurring problems water and air quality problems. If a $12.5 million request is passed, then negotiations on a design contract for a new site will be resolved by the end of the year.

As can be observed from this case, building occupants can reportedly start experiencing the effects of dampness, water leaks and mold right away. Neglecting to remediate the problem immediately can lead to further and more serious complications- costing more money in the long run and leading to discomfort and health issues for building occupants that could have easily been prevented.

If you think the building you are living or working in is experiencing similar problems as to what these judicial staff witnessed, don?t hesitate to call MVP Environmental Inc. at (954) 247-9444. 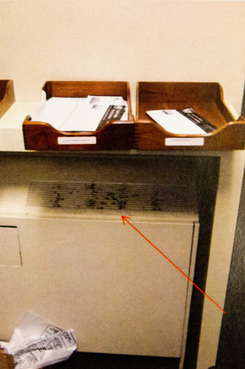 AC unit?with suspected mold growth as noted by
a consultant for the Georgia Building?Authority